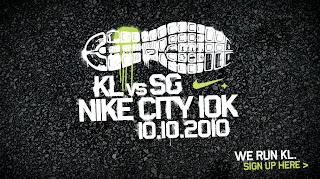 My Run
This is my 2nd run for marathon & my 1st attempt on 10k!  Despite my right ankle sprained from 2 months back in August, was adviced by my physician not to run for Marathon.  But why not, for the sake of running together with my friends & buddies of Original BootCamp @ Bandar Utama (OBC-BU)

I arrived @ the flag-off site 0615am awaiting the gather up and flag-off, with 8,000 other participants.
I was supposed to meet up with my other Bootcampers that's attending this run which are (Sarge Dann, Ody Lana, John Chua, John Ong, Jun King, Lilian Lee, Baba (Bahadom Baharia) & Chun Chia Kai) but in such a crowd its really hard to find them as I didn't arranged a meet-up before the run.  I was running alongside strangers and hopefully I'll meet up with my buddies along the run.

Well! it was a breezy and cloudy sunday morning, traffic was light & halted to a stop for the run.  The hustle & bustle on this part of the KL city street was put re-routed elsewhere for the run.  I always wanted to run in the city, well here's the opportunity to run while the streets are cleared for this event. Hahaha!

Flag-off @ KLCC Jalan Binjai, then to Jalan Kia Peng and crossover to Jalan Bukit Bintang along Pavillion Shopping Mall, split right on the crossroad of Jalan Bukit Bintang & Jln Sultan Ismail, and another right turn into Jln P. Ramlee and then turn left onto Jln Ampang (10k-route); then up to AKLEH expressway before we make a U turn right infront of the toll plaza then proceed back to the expressway exit then onto Jln Tun Razak, down into the underpass of Jln Ampang & Jln Tun Razak crossing, then U-turn in front of Wisma Tan & Tan, then back to Citibank Tower / Nikko Hotel and turn left onto Jln Binjai....Huhh! a total of 10km in 00:59:33(sec) "Official Chip Time" on my 2nd run but 1st 10km run. 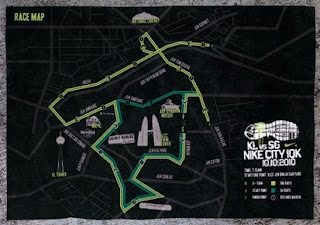 Other accomodations such as water stations & performances are placed in every 2 km, plus cheerleaders to lift runners' spirits.  Not much attraction from the cheerleader as they all dress up unappealing & not that cheerfull at all. But the performances by local bands such as "Forty Winks", "One Buck Short", "Joe Flizzow", "BunkFace", "Pop Shuvit", "Estranged" & "DJ Rudy" from the hitz.fm breakfast show was motivational as I did my sprint after hearing their songs and soul lifting tunes.

Well I was really glad to take part in this run and was amazed and surprised when all my fellow BootCampers did really well in their runs which surpassed their own personal best time.