An evening w/ venerable Lama Phuntsho sooth our heart, mind & soul.  In his words of wisdom & intellectual, he shares about compassion in respect & appreciation among each others; to visualize beyond material desires to not feeling the lost of not possesing & to think with wisdom when confronted with challenges to not being taken over by emotions and regrets.

His presence warmed our house with laughters and joys, as he's always looking at you in his eyes with a warm smile;  His calm & peacefull tone harmonizes our distress and unsettling minds, his humble thought conditioned humility into our behavior and thinking.

We end our evening around 2200pm, with a photo session with Venerable Lama Phuntsho.
It had been a great & enlightening meeting with him. 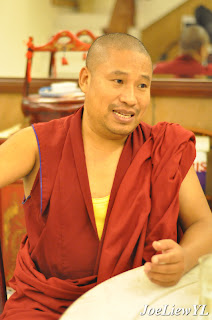 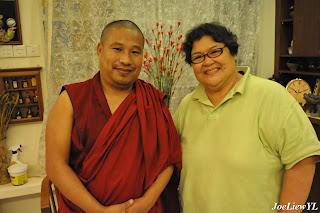 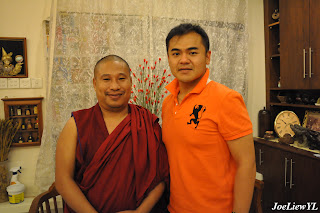 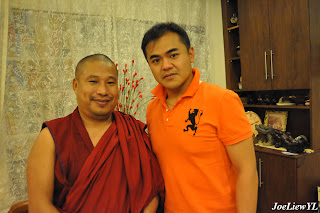 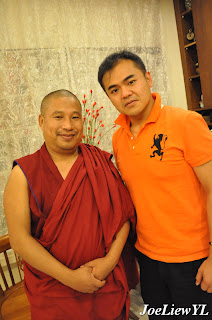 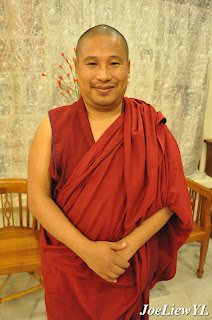 
Venerable Lama Phuntsho, teacher and translator, was born in 1966 in Thimphu, Bhutan. At the age of 20, he entered the monastic life at Tashi Cho Dzong (Central Monastery of Bhutan) and was ordained by the great Master H.H. Je Khen Rinpoche Tenzin Lhendup of the Drukpa Kagyu Tradition. From there, Venerable Phuntsho went to Dodedra Shedra, a Buddhist Learning Institute to begin his basic Buddhist philosophical and religious studies under guidance of the Great Master Lopon Samten Dorjee. 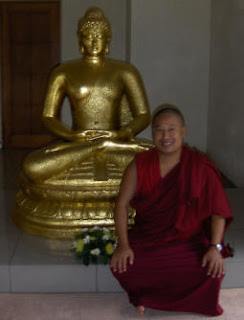 During 18 years of study in Gaden Shartse Monastery, Lama Phuntsho actively served the Ganden Monastery in many capacities including cultural preservation in Library projects and the construction of the main prayer hall of Phukhang Khangsten (one of the 11 houses or dormitories of Gaden Shartse). He also traveled with H.E. Khensur Rinpoche Jampa Yeshe serving as a translator to many countries including Switzerland, Malaysia and Singapore. 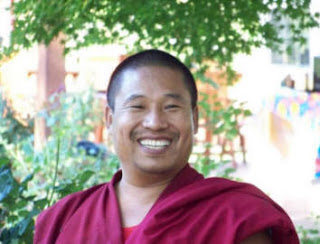 Lama Phuntsho has worked tirelessly serving the Monastery as a main organizer, translator, teacher, healer and administrator in leading the team from Gaden Shartse Monastery in promoting the “Sacred Earth and Healing Arts of Tibet Tours” in America. In 2000, 2004 and 2005 he traveled to more than 80 cities in America to promote this cultural tour.

Most recently Lama Phuntsho served as translator at Sakyamuni Dharma Centre working along side with the resident teacher, Geshe Konchok Tashi, a renowned Dharma Teacher from Gaden Shartse Monastery.

Presently, Lama Phuntsho is visiting his many friends and students in the United States and Works on behalf of his residence house of Kensur Rinpoche Jampa Yeshe.

Email ThisBlogThis!Share to TwitterShare to FacebookShare to Pinterest
Labels: Self-Enlightenment