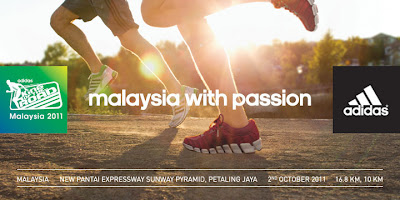 Adidas King-Of-The-Road (KOTR) 2011
Adidas King of the Road 2011 is a running championship held across 5 countries - Thailand, Singapore, Indonesia, Malaysia and Philippines.
Each country is a qualifying leg towards the finals, which will be held in the Philippines on 23rd-October-2011.  The winner of the Men Close and Women Close 16.8km category will win an all-expenses paid trip to the Philippines to compete with the BEST-OF-THE-BEST in Sutheast Asia.

The crowning of the Adidas King Of The Road Southeast Asia 2011
Only citizens or PRs are eligible for the championship title of the King of the Road for SOutheast Asia.  Foreigners are welcome to take part and compete for the prizes offered but not the title.

Race Distance
The championship race distance is 16.8km or 10km.  You will be able to complete 2 marathons (84km) over 5 countries with adidas KOTR 2011.

An estimated total of 40,000 runners are expected to pound the pavement across Southeast Asia for KOTR 2011.